The Augusta and Arnie Story

The year is 1960. April. Eight-year-old Mike Stone walks into the den and asks his father what he’s watching on TV. “ This is the Masters golf tournament son, and that is Arnold Palmer, my favorite player.”

That’s all it would take.

Fast forward to April 2013. The better part of a lifetime has passed. Mike’s wife Connie two years earlier has convinced him to start writing songs and take them to the recording studio. For close to half a century he’s been playing guitar and piano and singing lead. Not his day job, he’s winding down a successful career in his family company.

Other than a brief absence 2000 to 2006 Mike has regularly attended the Masters golf tournament since the late 1980’s. Since he has been the last 6-7 years in a row, he’s not going this year. Instead, he envisions spending the time playing golf at his Florida home, and watching the tournament. He will be fine not attending the tournament this year, right? Well, that’s the plan.

Wednesday morning of tournament week he plays golf with his friends. He settles in mid-afternoon to watch the par three tournament. As the music starts and the high definition pictures pierce his senses, the realizations that he will not be attending this year’s tournament, that he will not see Augusta National this year, are overwhelming.

“I remember feeling like I’d been punched in the stomach. I was almost desperate, it was pathetic. I was pathetic. It’s the kind of yearning that feels like an out of body experience.”

Without intention, no previous ambition, he picks up his guitar and starts articulating his feelings. It begins on Wednesday afternoon, by mid-morning Saturday, he will have written a tribute to the Masters titled “One Week in April”.

Returning to his Tennessee home the following week he heads to the recording studio and begins work on his new favorite song. On and off, it’s ok, it’s not. We got it, we don’t. “One Week in April” will take nearly two years to record in its first iteration.

It’s April 2016, Connie and Mike Stone are watching the beginning of the Sunday round of the Masters telecast. They have just returned from attending the tournament on Thursday and Friday.

Jim Nantz welcomes the audience and a summary of the traditional events leading to Sunday are presented. The traditional beginning of the tournament, tee shots by the honorary starters is markedly different this year. Arnold Palmer will be there, but not hit his shot. It is painfully obvious he is not in good health.

“I will never forget the look in Jack Nicklaus’ eyes. It was a look of hurt that penetrated my spirit. Then Augusta National chairman Billy Payne said, “Arnold Palmer will always be part of the Masters.” His statement was so powerful, so resolute. It chilled me. I looked over at Connie and said, “I’m writing a song about Arnold Palmer.”

On Monday Mike and Connie have business in Nashville. On the drive over Mike is ecstatic, believing that the song is coming quickly, the outcome excellent. Not to be.

“In my mind, I had composed the chorus and the melody on the drive over. I sang it aloud and in my head all day. The next day in front of my word processor I went to work.”

And work he did. Day to days. Weeks to months. Plenty of material, none would prove worthy.

“I had written literally several pages of lyrics and quite frankly, it was all garbage. I couldn’t articulate it properly. I was stuck.”

On September 25, Arnold passed. Mike is sad for obvious and personal reasons.

“I was sad for his family and the rest of the world. He was loved. I was narcissistically and personally sad that he would never hear the song in this life.”

Several days later Mike would be watching Arnold’s memorial service streaming on the Golf Channel from his office.

“April to September I’d been stuck. The words didn’t come. Halfway through the service, I’m writing.”

By the time the service is over the song “Thank You Arnie (We’re Your Army)” is finished.

In the fall of 2019, Mike would re-record all of his original material from his first project, including “One Week in April”. This time he would be recording in Nashville with his producer and keyboard artist Sandy Tipping. In August of 2020, Mike would tweak two lyric lines and “One Week in April” is finally finished.

“Augusta and Arnie” is being released in late October 2020. The work features 12 original songs. 11 written by Mike.

In an age of cynicism, few singer-songwriters are as positive and unapologetically heartfelt as Mike Stone.

Join Mike as he takes his message of positivity to the masses, sharing his uplifting and inspiring music. 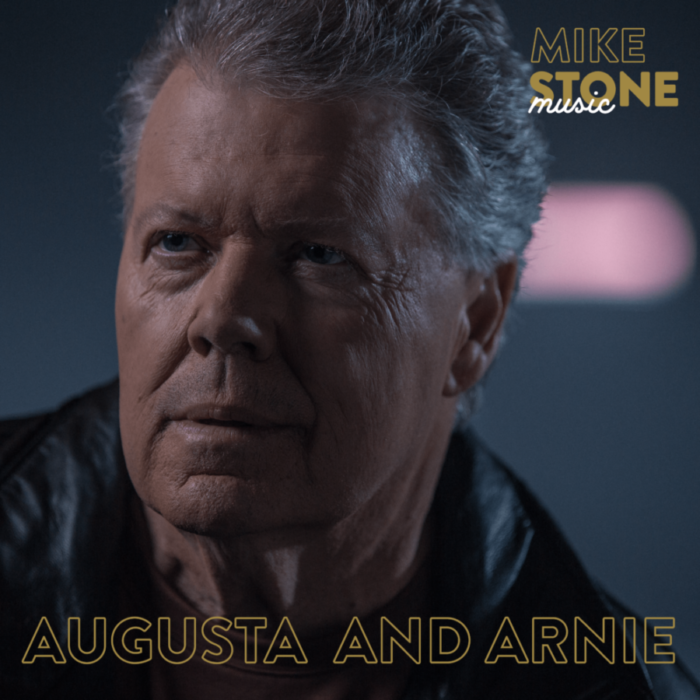 Early February 2022. Approximately three and a half to four years ago I started thinking about Pebble Beach as inspiration for a song. I’ve been to the Monterey-Pebble- Carmel area three times as an adult and had planned a return last year. We were unable to make that trip, and several others we had booked. COVID-19 concerns.